Save The Light, Inc.

Johnny Ohlandt on his way home from the lighthouse

Save The Light, Inc. began as a grassroots effort by concerned citizens.

The lighthouse had been in private hands since the GSA sold it at auction in 1965 to a private citizen. A businessman who hoped it would compliment plans for a camping ground on Morris Island purchased it. One year later, the lighthouse was purchased by another entrepreneur who was a partner in the firm that had just bought all of the land, high and submerged, on Morris Island. The lighthouse was intended to compliment an eventual real estate development. In 1996, a Columbia businessman unwillingly ended up with the lighthouse in a foreclosure action on a mortgage. While in private hands, the lighthouse suffered further erosion, deterioration and neglect.

Initially, the group was called the Morris Island Lighthouse Committee. It first proposed that the Charleston County Parks and Recreation Commission buy the lighthouse. The committee would then form a nonprofit foundation to raise the funds needed for preservation.

Barbara Schoch became Chairperson. Public support came. Thousands of South Carolinians signed petitions urging the PRC to buy the lighthouse. While the Parks and Recreation Commission consulted with the state on the legalities involving ownership of the lighthouse, precious time was being wasted. In fact, yet another real estate developer expressed interest in the lighthouse.

“Lighthouses have always played an important role in our maritime history while symbolizing safety, security, heroism and faithfulness. Please help us remain faithful to ourselves by preserving this important piece of our past, present and future.” 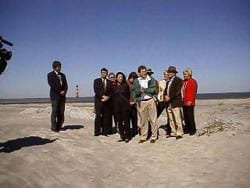 “Saving the Morris Island Lighthouse is symbolic of what’s great about America. A group of citizens recognizes a need, and they get together and do something about it. In the case at hand, the need is to acquire and stabilize a structure, which, more than anything else, attests to our heritage as a seafaring community. The Maritime Association of the Port of Charleston has made a financial contribution to Save The Light. We congratulate its organization on the acquisition of the lighthouse and thank them for their vision.”

— John F. Hassell, III, President of the Maritime Association, in a letter to the editor of The Post and Courier 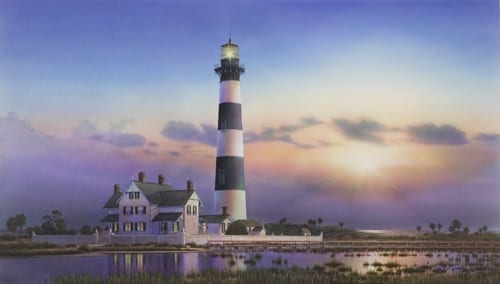 Artist Jim Booth released a special-edition print to raise funds for Save The Light, Inc.

“Save The Light took charge of efforts to save the 123-year-old lighthouse, a nationally recognized landmark when public agencies wouldn’t. It has done a magnificent job: It purchased the lighthouse from the owner, sustained the initial purchase price, and initial engineering studies have been completed. The level of public support generated for its preservation underscores the importance of the historic Morris Island Lighthouse to the community. The campaign for its preservation now needs the assistance of the state to move to the next stage.”

Heritage Trust Program and the Department of Natural Resources

Since the date of purchase, Save The Light has been dedicated to transferring ownership to the State of South Carolina through the Heritage Trust program, a program within the SC Department of Natural Resources. The act establishing the Heritage Trust program gives it the responsibility for the preservation of the important “natural areas” and “cultural areas” of the state. In the Heritage Trust Act, a “cultural area or feature” is defined as an “outstanding example of our historical or archaeological heritage and a site of special historic interest or containing outstanding remnants of the way of life and significant events of the past.” It is clear that the Morris Island Lighthouse falls under this definition. In fact, the Heritage Trust Program Board agreed as well. In its February 2000 board meeting, it recognized the Morris Island Lighthouse as one of the top 100 cultural sites in the State of South Carolina and forwarded its unanimous recommendation to the DNR board to acquire the lighthouse from Save The Light. A mutually acceptable transfer has been negotiated with the Heritage Trust Program Board. On April 21, 2000, the Board of Directors for the SC Department of Natural Resources unanimously voted to accept title to the Morris Island Lighthouse.

Here you can find some conceptualizations for Phase I of the preservation of the Morris Island Lighthouse. Plans were provided by the Hayward-Baker Company.

Changes to the original Phase I plans needed to be made before the actual construction. For photos of the Phase I preservation construction, see the photo gallery below.

This drawing shows section B-B through the drawing above. The view is looking across the base of the lighthouse.
Phase I - In May 2007, work began on the first phase of the lighthouse stabilization. The contractor, Taylor Brothers Marine Construction, from Beaufort, NC, drove the sheet piles that formed a cofferdam around the base of the lighthouse. The contractor worked all through the fall and winter to complete the work. His jack-up-barge can be seen from a great distance while it sits next to the lighthouse to drive the piles. All types of monitoring devices were installed inside and outside the lighthouse to help monitor the conditions as the piles were vibrated down into the sand. A local company, WPC, provided this part of the monitoring for the contractor. The devices monitored cracks for potential growth, possible lean, and general vibration during daily work. All of the windows in the lighthouse have no glass and the birds love to stay inside and even raise their young if not disturbed. The Phase I effort was completed in March of 2008, with a cost of just over $3 million. 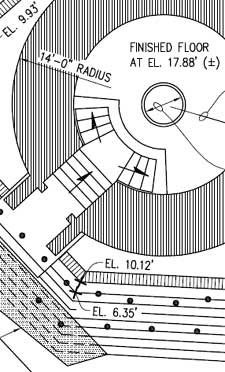 You can view some conceptualizations for Phase II of the preservation of the Morris Island Lighthouse. Plans were provided by the contractor, Palmetto Gunite.

Page 1 shows the layout for the new micro-piles that were installed around the perimeter of the lighthouse foundation. There were a total of 68 micro-piles installed at 75 tons each capacity.

Page 2 shows the actual location of the micro-piles and how they were spaced around the foundation. All of the work was inside of the cofferdam installed in 2008.

Page 3 shows an elevation view of the new piles in relation to the original piles. The new piles were installed into the marl layer under the lighthouse. The area between the cofferdam and the foundation was filled with sand and capped with stone.

For photos of the preservation construction, see the photo gallery below.

March 1, 2010, we awarded our Phase II contract to Palmetto Gunite Construction Company, Ravenel, SC, for just under $2 million. This was a design/build contract to install new concrete piles under the foundation. This contract also filled the inside of the Phase I cofferdam with sand to help stabilize the foundation. The installation of 68 new micro-piles rated at 75 tons each was completed a month ahead of schedule. The jack-up barge pulled away on July 31, 2010.

This work will surely stabilize the tower so that we can continue to restore and preserve it in subsequent phases.